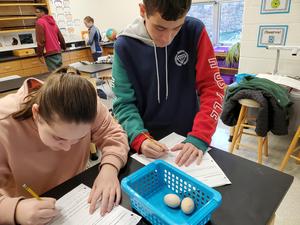 DV's upper school Physics class was studying Sir Isaac Newton's Laws of Motion. To make the Laws of Motion tangible, Katie Brasten set up stations to get the students thinking about how the laws might play out in different "real-life" situations.

DV's upper school Physics class was studying Sir Isaac Newton's Laws of Motion. To make the Laws of Motion tangible, Katie Brasten set up stations to get the students thinking about how the laws might play out in different "real-life" situations. The students paired up and visited each of the seven stations. Students had to decide which of Newton's Three Laws of Motion was best represented by each station activity.

Tug-O-Spring - Using a two-spring scale the students had a "tug of war" with their partner by hooking the spring scales together and pulling. Students observed the readings on the two scales and tried to produce specific readings, if possible.

Marble Motion - Six marbles are put in the middle of a track with one marble placed at the end of the track away from the other marbles. Students pushed the end marble quickly so it hit the other six marbles and observed what happened. They repeated this, experimenting with the number of marbles pushed and tracked how many moved.

Toy Story Science - Watching a Toy Story 2 clip students were instructed to find one example of each of Newton's Three Laws of Motion.

Swivel It, Just a Little Bit - Students sat in an office chair with their feet off the ground, twisting their torso. They were to explain what happened as they tried to spin around 360 degrees.

The Magician's Tablecloth Trick - starting with an empty cup on a paper towel and then moving on to a cup half full of water, without touching the cup or tipping it over, the students were to remove the paper towel from under the cup.

Think - Students were asked to figure out how a rich merchant stranded in the middle of a perfectly frictionless frozen lake can save himself when all he has is a bag of gold coins. At this station students we also asked to figure out which one of Newton's Laws explains why it is easier to hammer a nail into a piece of wood with a hammer that has a heavier head.

The students enjoyed the experiments and the challenges at each station. It was a great hands-on way to demonstrate Newton's Three Laws of Motion.

As a reminder, the three laws are below. Can you match them to the experiments above? Have fun.

Newton's 1st Law- An object at rest stays at rest or an object in motion stays in motion unless acted upon by an outside force.

Newton's 3rd Law- For every action force, there is an equal and opposite reaction force.