Benefits of Mindfulness Training for Students with Learning and Attentional Challenges

by Elizabeth Kriynovich
English Teacher
What is Mindfulness?
Mindfulness can be defined as living fully in the present moment, with intention and without judgment. It involves the acknowledgment and immediate release of thoughts, emotions, and sensations, enabling a more levelheaded means of reacting and responding to the world. It has Buddhist roots, and the name “mindfulness" is related to the Pali word sati, meaning “awareness," but mindfulness has become more than a strictly spiritual practice. 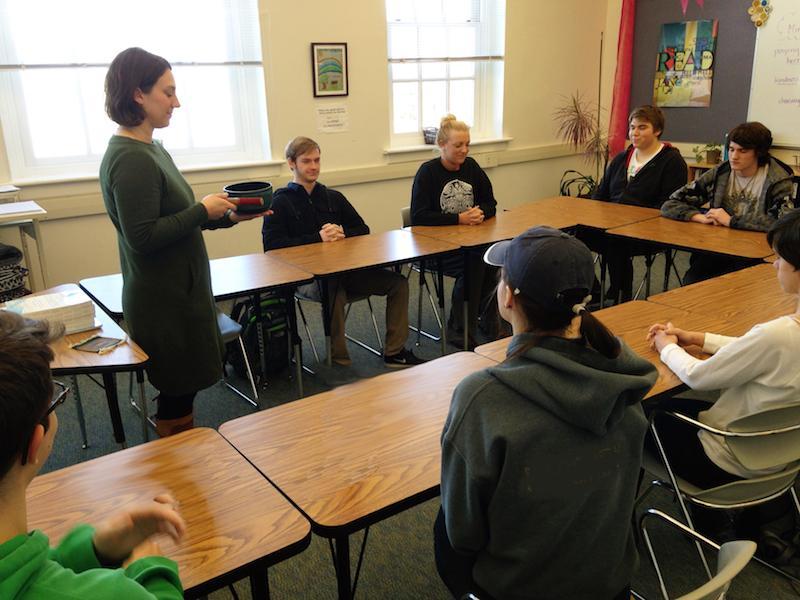 Over the last few decades, the practice of mindfulness, which is most often based on an attention to breath as a way of anchoring in the present moment, has grown in popularity and in respect. As mindfulness becomes increasingly common, how can we use it as a way to help ADHD and LD adolescents in the classroom?
Mindfulness practices range from brief and simple breath awareness practices such as counting the number of in-breaths from one to ten, beginning again whenever thoughts stray from the sensation of breathing, to guided body-scan meditations that progressively lead the focus on physical sensations throughout the body as a way of centering, to more abstract emotion-based exercises focused on sending goodwill, or lovingkindness, to the self and others.

Linda Lantieri, a leading expert in social-emotional learning, notes that mindfulness "helps cultivate a sense of peace and calm from which students can approach learning with ease."

Amy Saltzman, MD, who has developed a research-based mindfulness curriculum specifically for children and adolescents, rephrases the definition of mindfulness in accessible terms for children: "Mindfulness is paying attention here and now, with kindness and curiosity, and then choosing your behavior."

Saltzman's emphasis on using Mindfulness practice as a way of choosing behavior is crucial in working with ADHD populations. By keeping an open mind to what they are experiencing in the present moment, (or what is commonly referred to as nonjudgment when working with adult populations) students can learn to observe emotions as they arise and learn to identify the impulses driving behavior.

Researchers are beginning to quantify the benefit of mindfulness in the role of managing attention disorders. Schoenberg et al. (2014) report that mindfulness-based cognitive therapy has been shown to enact comparable neurophysiological effects related to attention and self-regulation as pharmacological ADHD treatments in adults.

In a 2013 study published by the Journal of the American Academy of Child & Adolescent Psychiatry, researchers at the University of California, Irvine reported that, while the benefits of ADHD medications generally wane by the third year of treatment, mindfulness training appears to strengthen the areas of the brain required for sustaining attention, enabling enhanced concentration abilities that are sustained over time.

Benefit on Adolescent ADHD
Research into the benefit of mindfulness on an adolescent population is relatively limited, but initial studies are promising. Burke (2010) identifies the importance of mindfulness and its relationship to attention. Three primary elements have been proposed as components in the process of mindfulness: attitude, attention, and intention (Shapiro et al. 2006). Mindfulness practice is grounded in particular attitudinal foundations, which include non-judgment, acceptance, trust, patience, non-striving, curiosity, and kindness (Bishop et al. 2004; Kabat-Zinn 1990; Shapiro et al. 2006). Attention includes focused, broad, and sustained attention, and skills in switching attention from one stimulus to another. The third element of conscious intention extends from an intention to practice, to the intentionality one brings to directing, sustaining, or switching attention. Intentional attention can be considered as the self-regulation of attention (Bishop et al. 2004).

After mindfulness training, individuals, including adolescents with ADHD, demonstrate an increased capacity for this "regulation of attention," which is crucial to success in classroom learning. Van de Weuher-Bergsna et al. (2012) noted that "after mindfulness training, adolescents' attention and behavior problems reduced, while their executive functioning improved, as indicated by self-report measures as well as by parent and teacher reports." Since mindfulness practices focus on "increasing the ability to control attention, and on reducing automatic responses," it can have a behavioral impact on students with ADHD. Mindfulness has also been shown to enhance performance on tasks measuring executive function such as attention, working memory, and cognitive control.

Zylowska et al. (2007) note that the repeated practice of mindfulness exercises, such as the invitation to "pay attention to attention" and the use of the breath as an "attentional anchor" can "engage diverse aspects of attention such as alerting, orienting, and conflict attention, metacognition, inhibition, and working memory…. repetition of the same activity can activate corresponding brain regions [for attention] and potentially strengthen the underlying circuitry. Mindfulness could help rehabilitate aspects of attention and executive function."

Research into LD
For a student population such as the one at DVFS, the benefits of mindfulness are not limited to students with ADHD. Beauchemin, Hutchings, and Patterson (2008) have measured effectiveness of a 5-week mindfulness meditation course in adolescents diagnosed with LD. In addition to expressing "overwhelmingly positive attitudes toward the program," students studied measured significant improvement in anxiety, social skills, and academic performance after the program.

Practicing Mindfulness in the Classroom
Integrating Mindfulness into the classroom can be accomplished in short, simple daily practices that require only a few minutes of classroom time. In their book "Tuning In: Mindfulness in Teaching and Learning," (2009) educators Irene McHenry and Richard Brady offer a collection of strategies and exercises designed for classrooms using mindfulness.

One daily mindfulness exercise is the opening with a breathing or centering activity, often using prompting from a teacher. A bell or tone is sounded to mark the beginning and the closing of the activity, while students participate by sitting with eyes closed and paying attention to their breathing. Gentle movement practices can also be incorporated into this opening exercise, such as extending and releasing the arms in coordination with the breath. The combination of movement and breathing is especially effective when working with younger children or children with ADHD.